Forrester, the independent market research firm, recently helped unveil the concept of value-based DevOps. Value-based DevOps is centered on the idea that companies not only want to develop software with greater speed and efficiency, but to ensure that the software developed delivers more value to customers and the business

That sounds obvious, but value is seldom part of the discussion in DevOps. Forrester, in partnership with Broadcom, is seeking to put that right. This infographic shows the data underpinning Forrester analysts’ thinking. The data is based on a global survey that identifies priorities, challenges, and outcomes around three major value-based DevOps characteristics: transparency, efficiency, and value.

Most organizations implementing DevOps today focus on efficiency, velocity, quality, and, to some extent, visibility and transparency. This is exemplified by DORA metrics, which are considered industry standard for DevOps. In essence, these are IT and technically focused metrics. Improving these metrics has been shown to improve business performance. However, these metrics do not actually capture and track delivery and realization of actual business value or business outcomes.

To realize true business benefit from DevOps, we therefore need to evolve our DevOps approaches from tracking technical metrics to focusing on value metrics.

In this blog, we will discuss how we evolve DevOps platforms, practices, and solutions to support this value-based approach.

Based on our customer engagements, we see organizations following the evolutionary path described in the figure below.

The stages of this evolution are described below.

In this stage, customers are mostly focused on efficiency. From a technology perspective, this manifests itself in the form of tool chains. Tool chains typically rely on custom, point-to-point integrations between tools across the DevOps lifecycle, from planning to operations.

In this stage of maturity, the focus is on automating the flow of physical artifacts (such as code, builds, binaries, data, configurations, packages, and other deployable or monitorable items) through the DevOps pipeline. An example of a typical DevOps toolchain is shown in the figure below: 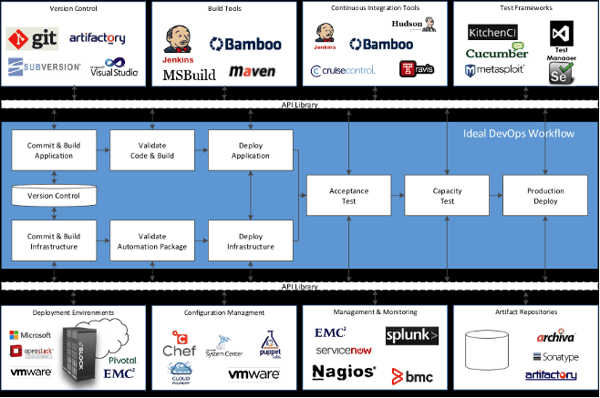 The key metrics that are typically tracked during this stage are relevant to speed and efficiency, for example:

This stage is most useful for DevOps practitioners like developers, deployment engineers, and operations engineers.

At this stage of maturity, most DevOps toolchains are built using tools like Jenkins. While this is a popular approach, it has its drawbacks (see our webinar on this subject here). Following are some of the challenges associated with these toolchains:

In this stage, customers are mostly focused on the delivery of the logical payload of the DevOps pipeline. In this context, payload refers to application features, stories, and other backlog items. In addition, DevOps delivery platforms also address many of drawbacks in the toolchain approach discussed in the previous section. These platforms provide easier, low-code or low-maintenance integration of tools or underlying toolchains. They also provide orchestration of processes across the pipeline.

Such platforms also typically provide built-in support for DevOps lifecycle data collection and organizational metrics, as well as support for security, governance, and auditability. Some of the key differences between DevOps toolchains and DevOps delivery platforms are summarized in the figure below. 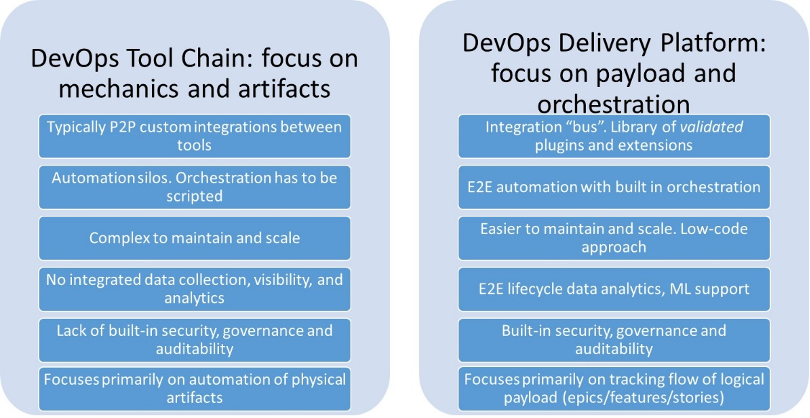 DevOps delivery platforms shift the focus to such personas as product managers, product owners, and release managers. These team members are more interested in tracking the progression of logical application components (such as new features or stories or other backlog items) through the pipeline.

This implies that such platforms will always have strong integration with the requirements and release planning/definition tools in which the logical payload is defined or managed. Note that, for DevOps delivery platforms, integration with backlog management systems is not just at the team level—it also requires integrations at the program and enterprise levels. This enables teams to track logical payloads at different levels of abstraction, from epics down to stories, across multiple pipelines and release trains.

The key metrics that are typically tracked during this stage (in addition to those in stage 1) are relevant to visibility and orchestration, for example: 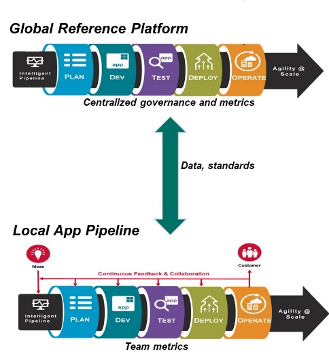 The model provides application teams with some tool-chain level flexibility at the local level, while enforcing certain standards at the global level. Through data collection, global teams can enforce governance across local pipelines. (See figure below.)

DevOps VSM platforms shift the focus to personas such as product managers, line-of-business leaders, and others who are more interested in tracking the progression of value through the pipeline. This includes the elements of value associated with the logical components that we discussed in stage 2. This implies that such platforms will always have strong integration with value definition and tracking tools, which is where the value associated with the logical payload is defined and managed. The delivery platform implicitly ties the value of logical components to the underlying DevOps events, such as releases. These events are then tied to the physical components of the application, such as builds.

Due to the dependencies between value delivered, and the underlying logical and physical components they are tied to, DevOps VSM platforms are typically layered on top of DevOps delivery platforms—in fact they can connect to a number of underlying platforms used by different teams.

Most DevOps VSM platforms focus on value delivery. While this is helpful, the real benefit from a business perspective lies in tracking value realization. This gets us to the real level of BizOps (see the next section on BizOps).

Like all general VSM platforms, DevOps VSM platforms help to identify bottlenecks in the flow of value and recommend process improvements. Unlike in stage 1 and 2, where bottlenecks are often simply defined in terms of cycle time, in stage 3, such bottlenecks are prioritized based on the value impediment rate, often across multiple application pipelines. In other words, impediments are prioritized based on the value of underlying logical components affected.

The key metrics that are typically measured during this stage (in addition to those in stage 2) are relevant to flow of value. Following are several examples:

As discussed in the previous section, being able to track business value realization is the ultimate aim of value planning and investments. This helps to extend the realm of DevOps into the business, something we call BizOps. (See the “What is BizOps?” page to learn more.)

BizOps platforms span and integrate all three capabilities, enabling teams to correlate planned value with the value delivered and realized. These platforms provide a new approach to data-driven decision making that connects business operations and technology functions together to drive business outcomes. By successfully employing BizOps, organizations can build a new level of transparency, traction, and trust that drives collaboration across departments. Through BizOps, enterprises can apply maximum resources and efforts to achieving vital business outcomes, such as boosting business growth, enhancing the customer experience, and increasing profitability.

To realize the benefits of BizOps, teams need a new AI-driven approach that augments and even automates decision making within a BizOps framework. In subsequent blogs, we will discuss more about the architecture of BizOps platforms and the key processes and metrics they support. Until then, we hope your DevOps initiatives are adding value.