BizOps for the
Business Leader

Power your growth by realizing the full potential of a BizOps strategy. Ensure budget, staff time, and resources are focused on the business objectives that matter.

To deliver quality software quickly, CEOs and IT leaders need to be aligned on goals, metrics, and strategies.

3 Keys to Deriving Value from BizOps

To maximize the power of BizOps, focus your teams on these
three key objectives:

Harness AI-Driven Decision Making To keep pace in today’s markets, you need a hybrid approach that leverages both AI and human intelligence. With human insights and data-driven AI, your teams can make markedly better decisions.

Connect IT Outputs to Business Outcomes Traditional IT outputs are inward-facing. Your teams need to connect efforts to business metrics like conversion rates, sales per hour, or revenue per customer.

Give Your Teams Purpose Linking IT outputs to business outcomes fosters engagement and unifies your teams around a common purpose. Engaged employees make better decisions and produce better results.

The brightest minds in tech and business talk about the importance of BizOps.

Distinguished author and professor Tom Davenport describes the three levels of decision-making automation and offers examples of each.

Kieran Taylor, author of DevOps for Digital Leaders, talks about the link between BizOps and DevOps.

IDC’S Stephen Elliot gives recommendation on how your organization can start adopting BizOps.

Distinguished author and professor Tom Davenport describes the three levels of decision-making automation and offers examples of each. Kieran Taylor, author of DevOps for Digital Leaders, talks about the link between BizOps and DevOps. IDC’S Stephen Elliot gives recommendation on how your organization can start adopting BizOps. Leading and Adapting in Uncertain Times: A Hypothesis-Driven Approach

Value Stream Management: How to Achieve Your DevOps Vision in 2021

Are You Leading Confidently, or Bracing for Change?

The Business-IT Disconnect is Real—and Expensive

A recent survey from Harvard Business Review Analytic Services, in association with Broadcom, offers a compelling look at the demand for BizOps. Drawn from interviews with more than 200 executives, the survey found that IT teams don't collaborate closely enough with business units in their organizations, which is leading to mounting frustration, significant costs, and lost opportunities. 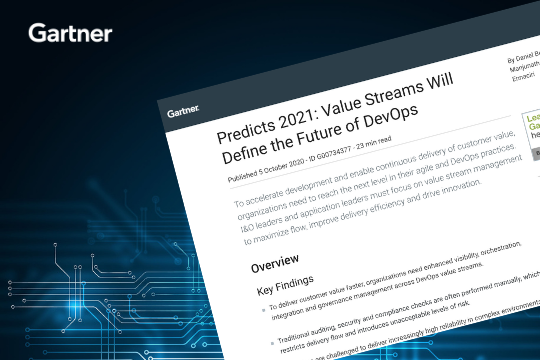 Predicts 2021: Value Streams Will Define the Future of DevOps

To accelerate development and enable continuous delivery of customer value, organizations need to reach the next level in their agile and DevOps practices. ITOps leaders and application leaders must focus on value stream management to maximize flow, improve delivery efficiency and drive innovation.

Across an organization, core strategic concepts around direction, purpose, and values aren’t clearly understood. Too often, asking 10 people on a team about core strategies will yield 10 different answers.

This disconnect becomes a chasm when you look at the strategies of technology teams and business teams. For example, in many organizations there’s a complete gulf between technology outputs and business outcomes. Without correlation to business KPIs, development and operations teams may be investing in the wrong thing.

Over the years, team building exercises have often included an activity in which different team members stand and intentionally fall backward, trusting their teammates to catch them. This trust exercise has been used a lot, and it represents an apt model for the trust that digital transformation requires.

Make no mistake, the changes associated with digital transformation can be fundamental and scary. Ultimately, staff members need to put their own team goals and approaches to the side. They may need to take on new roles and learn new approaches or technologies. Not only does this mean leaving behind some of the expertise and skills they’ve amassed, but also giving up the familiarity and comfort associated with their prior way of working. Ultimately, this change and disruption takes a leap of faith on the part of staff. Without trust, they will not fully commit to this leap.

Across organizations, transformation efforts are stifled by a lack of trust. Built around legacy silos, teams lack effective coordination and collaboration across distinct teams. This is a problem between various organizations, particularly between business and IT teams.  To build the trust required, IT and business leaders need to establish enhanced communications, shared reporting, and consistent KPIs.

Maybe because of the failings above, or maybe due to a host of other reasons, near-term results may not be realized. This lack of traction can be disastrous, and lead to a vicious cycle. Presented with a lack of traction, those team members who were committed may waver. Those who were originally unconvinced or disengaged will view subpar results as justification for their lack of commitment. These repercussions can also hold true for executives, whose continued support, engagement, and investment is so critical.

It is important for teams leading transformation to establish a culture and focus on getting results. In this effort, teams are well served by adopting an agile mindset, breaking projects into smaller components of work, speeding delivery, and doing more frequent iteration.

This also often requires leaders to figure out a way to make fast changes in culture. To start achieving the results needed, it is important to recognize that culture change, which is often the biggest impediment to transformation, also needs to happen fast. In a report, Gartner analysts describe pragmatic approaches for instituting the change required, referring to these tactics as “culture hacking.”2 Culture hacking is about taking fast actions to make change real and immediate. This can include a range of tactics:

Leaders must align their projects, products, and portfolios with business goals and demonstrate the value delivered.

Need help getting started with implementing BizOps in your organization?